The Holga is often equated with a toy.  Is it because a Holga is made of plastic and so are most toys?  Or that they’re both cheap and both mostly made in China?  Sure, it’s plastic and cheap and creates heavily vignetted images which are the lo-fi antithesis of digital high resolution, but this seems to be the appeal.  Creating anything near-decent on a Holga is like giving a big, plastic, made in China middle finger to the latest Fuji X100 or Panasonic Lumix.  You don’t have to look much farther than Michael Kenna’s book ‘Holga’ to see the cameras capabilities and potential. 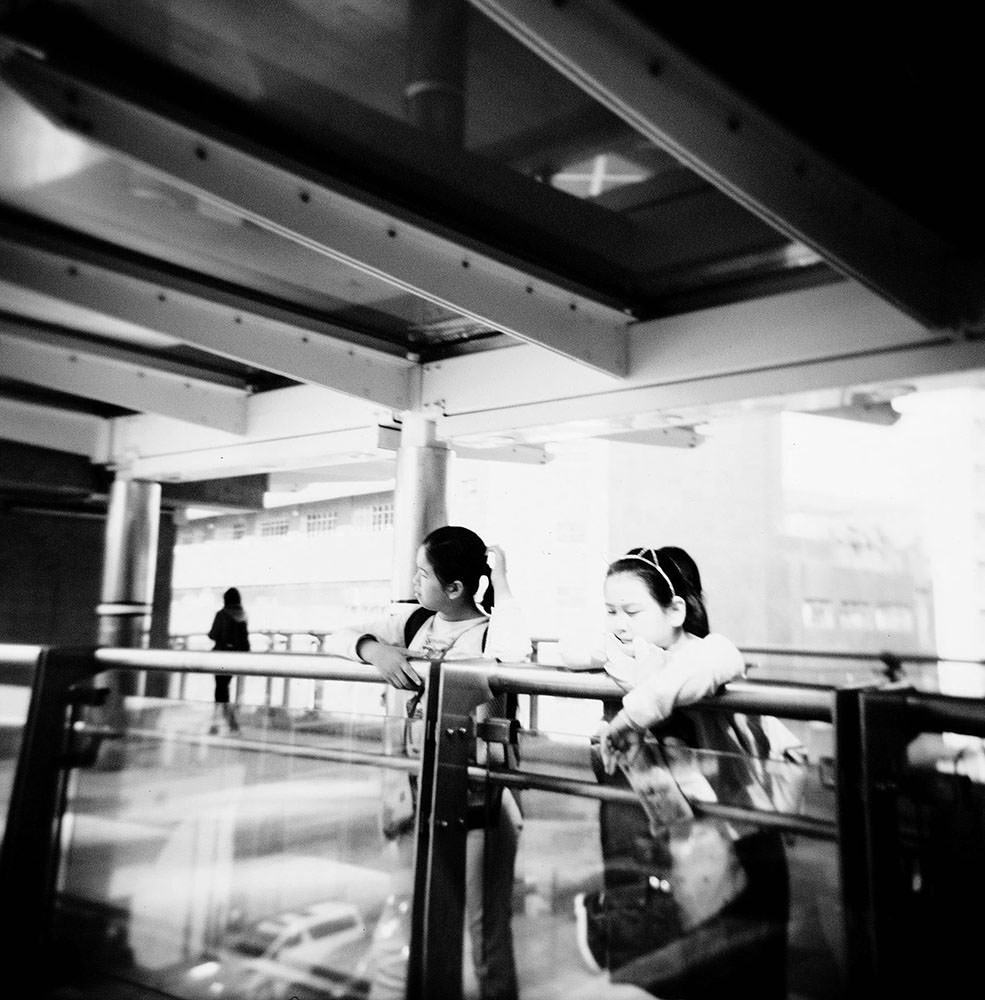 The Holga was designed in 1982 in Hong Kong  by TM Lee so it seemed a good camera to capture the visual atmosphere of Hong Kong, as the movie made in Hong Kong does using left over film stock- a visual vibe that is gritty and dreamy when executed well.  Another reason is because of the wild bulb shutter speed(there are also speeds of 1/100 and 1/125 but they are no fun).  Often when shooting slide you expose for the highlights and end ups with a negative lacking contrast, or maybe it’s just me.  I’m more attracted to contrast over detail in a photo so having the unlimited exposure of a bulb shutter speed such as the Holga’s seemed appealing. I wanted to use a camera to overexpose the hell out of the negatives.  I’d much rather have a surrealistic high contrast negative than one that lacks density and looks underexposed and ghostly.

JCH Streetpan is also an interesting choice for this experiment as I’m developing it with the Rollei Black and White reversal kit, which there are no development times/temperatures for listed on the web.  As I’ve never shot a Holga before these two choices seemed to go together and make for a photographic moon expedition.

Overall the pictures turned out imperfect and impressionistic, which is to say they sucked, and yet I like something about the results… or that at the very least I got what I expected from a camera that is often mistaken for a toy.   It was as wikipedia advertised ‘some photographers began using the Holga for its surrealistic, impressionistic scenes’.

JCH Street Pan is avalible through our website and we have our own in hourse lab where we  offer Black & White Reversal Process & high quality scans! For details click on the button below.

Your cart is currently empty.

There are 0 item(s) in your cart

Added to cart successfully. What's next?